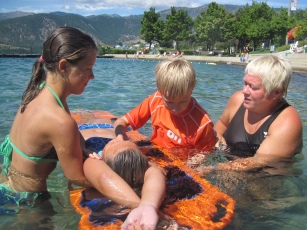 At three years of age, Viki Downey was mesmerized by the lifeguards in her hometown of Coeur d’Alene, Idaho. From that point, she decided that she wanted to be a lifeguard and on June 5th, 1965, she followed through by starting her first official lifeguard job at Camp Hayden Lake.

Fifty years later, Viki is still keeping a watchful eye on the waters.

Viki’s passion for the aquatic life comes across fluidly in conversation. Her idols include John Olguin, former director of the Cabrillo Marine Aquarium, and long-distance open-water swimmer Lynne Cox. Her passion is reinforced by five decades of varying water activities. As a child, Viki spent her summers as a junior lifeguard and assisted senior lifeguards with swim classes. In 1967, she became certified as a Red Cross Water Safety Instructor and started work at the YMCA. In addition, she started teaching water ski safety. 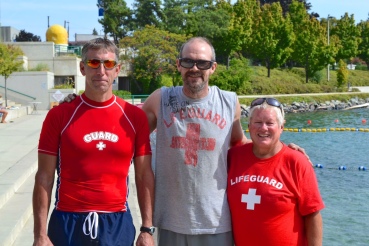 As Viki grew older, and with a growing list of activities, she knew that staying current on her skills and certification was important. In her early 30s, Viki’s water safety recertification came with a message from her 17-year old instructor.

“I received my certification and she wrote “excellent skills but too old” on the certification,” Viki said with laughter. “I found that amusing.”

The comment didn’t discourage Viki from her love of swim. She is currently the Aquatics Coordinator for Manson Parks and Recreation. It’s a two-hour round trip commute every weekday but every drive is worth it for Viki. Five years ago, the Manson Parks Board of Commissioners approved Viki’s plan to teach free swimming lessons to children that couldn’t afford lessons. This led to the creation of the Lake Chelan Swim Foundation which holds an annual swim event to raise funds for those swimming lessons.

Supervising an aquatics program and helping with a foundation has helped Viki develop a new set of administrative skills. However, those “excellent skills” that she has developed as a lifeguard still continue to be used and have helped save a life.

Summers ago, as Viki was putting away equipment, she noticed that Gary, a fellow lifeguard, was in the water in his bike clothes–Gary was pulling a male drown victim from the water. She rushed to help and they found that the victim had no pulse. After 45 minutes of CPR and the use of an AED, John, the drown victim, was revived and was able to receive additional medical care. To this day, John has had no respiratory complications but the bond between rescuer and survivor has an additional element to it.

“John is one of my favorite people,” Viki said. “At that time, John’s significant other was pregnant and I now give swimming lessons to their daughter.”

After 50 years of life in the water, Viki has no problem staying motivated. While she has never participated in competitive water sports, she enjoys finding ways to challenge herself. A large part of her longevity may be because of her mindset–what others see as a career path, she sees as a calling.

“When someone asks me when I plan to retire, I say from what?” Viki said. “I don’t feel that it’s a job. I love to teach swimming.” 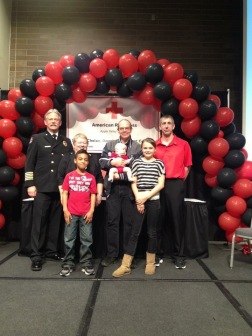