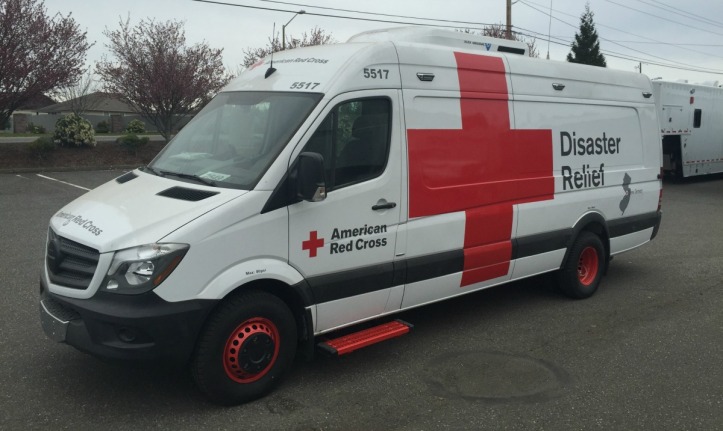 For the last 2 years, at a rate of about 2 per month, a local Ferndale company has been quietly improving the fleet of Red Cross Emergency Response Vehicles (ERVs).

“There are two in the shop now and more on order. By the end of this summer we will have produced 49 ERVs for the American Red Cross,” said Ryan VanDriel of TriVan Truck Body

The company won a bid to construct what the Red Cross calls their “Next Generation ERVs” in the summer of 2014 after a competitive national process. But winning the bid was far from the last hurdle to overcome.

“The Red Cross basically asked us to produce something that hadn’t been done before,” VanDriel said.

Although the Red Cross provided a prototype to work from, that particular design didn’t meet Federal Motor Vehicle Safety Standards. The ERVs had to be both functional for providing service and safe to ride in. Seats (in the rear of the van) needed to face forward while driving, then swivel to face the service window while parked.

VanDriel tells us, “FMVSS seat certification wasn’t easy. We tweaked the design of the seat base with a lot of trial and error. Adding structure to the van created a foundation for the seat to bolt to.”  He went on to describe the response from the Red Cross when they finally succeeded, “There was a lot of fist pumping on both sides when the seat testing happened and we passed!”

Even then, there was tweaking to do before TriVan and the Red Cross achieved what they now refer to as their “Home Run Model.” Two subsequent prototypes were road tested by Red Cross volunteers, who drove them across the country while soliciting feedback from the responders who use them most.

Some of the new features include: a more user-friendly interface, improved access/ergonomics, and a stand-alone power source while parked.

“We’re proud to have this company and this project in our backyard,” said Karen Miller, Executive Director of the American Red Cross serving Northwest Washington. “The emergency response vehicles are providing jobs in our community, and their work helping the Red Cross deliver on its mission.” A mission that is felt throughout the staff at TriVan as well.

“It’s exciting to know that our product, being produced in Ferndale, Washington is being used in real world applications. Our staff is very much aware of that. In times of crisis or uncertainty, these vehicles are beacons of hope.

In our own small way, we feel we are helping the American public by serving the Red Cross” said Ryan VanDriel, Partner, TriVan Truck Body.

For more information about Next Generation ERVs go to: http://www.redcross.org/news/article/Red-Cross-Introduces-New-Emergency-Response-Vehicles