What To Do Before the Fire Department Arrives 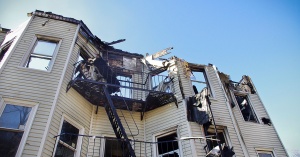 A simple mistake turned what might have been a routine New York City apartment house fire into a tragedy that took more than a dozen lives.

Finding her kitchen in flames, a woman grabbed her children and fled her apartment – leaving the front door wide open. That let the flames spread into the hallway and up the stairwells until the entire five-story building was engulfed in flames. Before the fire was extinguished, 12 people were dead, four critically injured and more than 40 survivors were left homeless on a bitterly cold night. A 13th person died later.

So what should you do in those critical few minutes between the time you discover a fire and when the fire department arrives?

For answers, I turned to Captain Kyle Ohashi, a veteran of 28 years as a firefighter and now the public information officer for the Puget Sound Regional Fire Authority. Based in Kent, WA, his agency serves Kent, Covington and SeaTac plus unincorporated portions of King County.

The first decision you need to make when fire breaks out, says Ohashi, is whether to fight it yourself or call for help. His advice is to tackle the fire yourself only if you are absolutely convinced you can extinguish it without help. “If a pot on the stove is on fire and you can put it out by placing a lid on the pot, do it,” he says. “If you think it is beyond your ability or your comfort level, call 911.”

The safe course, most of the time, is to get help. A fire doubles in size every 30 seconds, and all the petroleum-based plastic in our homes makes fires burn faster than they used to. What looks like a fire you can easily contain can turn into an inferno very quickly.

Your next decision, says Ohashi, is whether to evacuate your dwelling or shelter in place. If the fire is inside your home, you really don’t have much of a choice: you will need to get out as quickly as possible. You may have more latitude if the fire is in another unit in an apartment building or assisted-living facility – especially if the space is protected by sprinklers. Then you might be able to shelter in place until help arrives. Working sprinkler systems will control nearly all fires and keep them from spreading.

Because fires spread so quickly, if you evacuate, you must do so quickly. Ohashi talks about the “five-minute rule.” Run evacuation drills including everyone inside your home. The challenge is for everyone to make it safely out of the dwelling within five minutes* or less.

If someone can’t meet the five-minute target because of age or infirmity, you do have a fallback if you are in a building with sprinklers. Move the person as far from the fire as possible, near an open window. First units on the scene will make a circuit of your building to see what they are dealing with. Anyone inside can use the open window to call to rescuers.

If there is fire inside your home, touch door handles before moving from room to room, to make sure there isn’t fire on the other side. As you leave, close all doors between you and the fire and close the outer door when exiting your home. (As a general safety rule, Ohashi says to keep all bedroom doors closed while you are sleeping. That would keep flames, smoke and toxic gases from spreading if fire breaks out in the night.) 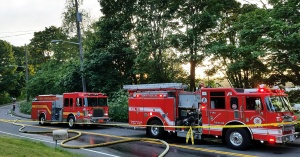 It is important to get fire units on the scene as quickly as possible, but trying to call from inside the fire building exposes you to needless risk. “We don’t want you getting hurt trying to call 911,” says Ohashi. Get yourself safely outside and then make your call. It is natural to want to linger inside until you are sure everyone is out safely, but that could delay the arrival of professional help on the scene. “There are times when you just have to get out and call 911 whether or not you know that everyone is safe,” Ohashi says. “Just make sure you communicate to us that there may be people unaccounted for who may be inside.”

When you do call 911, the operator will ask who you are, where you are and what is your emergency. Based on your answers, fire units will be dispatched to the scene. The operator will then press for more information so arriving units know what to expect: Where is the fire? What is burning? Are there people inside who will need to be rescued? Are there pets? Are special hazards inside the home such as propane tanks or firearms?

There should be a family meeting place that everyone knows about, away from the fire but still close to home. Count noses at the meeting point. Assume anyone not there is still inside your home and will need to be rescued by firefighters.

If it is a small, contained fire, you can try putting it out with the extinguisher, he says. But get out if the fire is spreading or if you exhaust one extinguisher and the fire is not out. And never let the fire get between you and an exit to safety.

Ohashi suggests that extinguishers be used by a two-person team. “One person would fight the fire,” he says. “The other person would keep watch to make sure they can escape the fire safely.”