Lessons in Preparedness, Giving Back 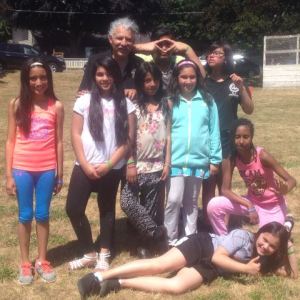 Each week, the Girls’ and Boys’ Achievers Academy students at Northgate Elementary hear from speakers about a variety of topics. On this day, representatives from the American Red Cross were on hand to teach emergency preparedness skills. To introduce the Red Cross presenters, Instructor Guillermo Carvajal, a Family Support Worker with the Seattle School District, begins by sharing a story about how the Red Cross helped him after a house fire.

“We lived in a very old house and under the stairs leading to the main floor, a fire had started,” Carvajal said. “We didn’t know how … we lost everything. It moved fast. The Red Cross called me and asked if I needed some help.”

For nine years, he held onto the Target t-shirts he received through the Red Cross for sentimental reasons.

“I wanted to at least give them an idea what should be done and who to talk to in the case of an emergency,” he said. “Kids need to have the tools so that when a situation appears in front of them, they don’t panic. They think, ‘oh yeah, I can handle that. I remember this piece.’”

The Basic First Aid class teaches kids what to do to help someone who is choking, how to wrap a bandage, and how to tie a sling. It is one of five classes the Red Cross youth department teaches to prepare youth for natural disasters and emergencies.

After his experience with the Red Cross, Carvajal connects his friends and the families he supports with their services.

“I tell people I went to the Red Cross,” he says. “I was involved in a fire and here’s what happened. I want you to feel comfortable asking for first aid classes or earthquake classes or going there and purchasing something.”

Help the #RedCross prevent a blood shortage amid the #COVID19 pandemic. Blood donations are urgently needed. In appreciation, those who come to #DonateBlood or platelets in June will get a $5 Gift Card by email, thanks to Amazon. Details: rcblood.org/together
Spotted in @timessquarenyc! This pic of a Yakima WA based volunteer with the first #convalescentplasma delivery for our state. Nice work Paul. And thanks to all who have donated. 🩸 #covid_19
We would like to extend our deepest sympathy to anyone who has lost a loved one due to the #COVID19 pandemic. Many people who have experienced a loss due to COVID-19 have also experienced a disrupted bereavement and grief process due to restrictions. We understand that with loss comes many needs, including emotional and other services. We’ve created a Virtual Family Assistance Center for anyone in the U.S. dealing with loss around COVID-19 to get the help and support they need: RedCross.org/VFAC . #coronavirus #emotionalsupport #pandemic
EMS providers: You support the health and well-being of our nation. Thank you this #EMSWeek2020 – and every week. #EMSstrong