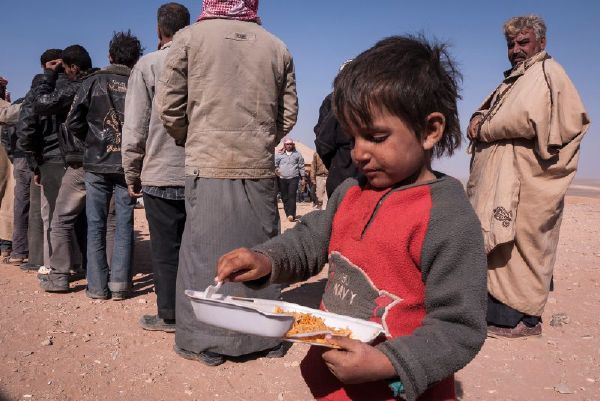 A New Pair of Shoes

“They stole my childhood.” Joseph uses these simple words to describe his experience as an Iraqi refugee. He was 2½-years-old when his family fled from Iraq to Kuwait back in 1991, during the First Gulf War, then to a refugee camp in Saudi Arabia, hoping for a better life.

I met Joseph Al Sultan on World Refugee Day at an annual event organized by the American Red Cross at the Seattle Town Hall. The event aims to recognize refugees for their resilience in the face of war and conflict. Joseph was surrounded by people. People who were shocked, amazed, curious. A tall, very well-dressed gentleman from the audience shook his hand and loudly whispered into his ear: “I never had any idea what life in a refugee camp might be like.” That was certainly true about many of us, I thought – all those who didn’t spend their childhood without toys or fresh food or shoes. I decided to invite Joseph to share his story in a short interview and instead we spent more than two hours digging into his painful memories, trying to shed light on something about which many of us know so little.

“My dad was thinking we would be staying at the camp temporarily, and that they would allow us to move to Saudi Arabia to live our lives, but it turned out it was a lifetime membership,” Joseph recalls. “Little by little, people who were treated like animals, incarcerated in their tiny cells without air conditioners (in the desert it is usually above 100°F in the daytime) and sometimes without even a roof, gave up hope, expecting only one possible scenario: that they were going to die there. “Military people would usually dump off some rotting garbage, which they called food, to feed people. You couldn’t find clean water or medicine, and of course there was no way you dared complain about it,” Joseph continues.

As Joseph pointed out, families had another choice: to return to their homeland. Joseph’s uncle did. He was lucky. After further persecution in Iraq, they only cut off an ear.

Some things will remain branded into his memory forever, I thought. Inside a strong, smart and educated Joseph, sitting in front of me, there will always be a small, scared, barefoot boy, whose biggest dream was to own a soccer ball and whose biggest fear was to die in the camp with no education, future or hope.

Eleven years later, the Al Sultan family, supported by the United States Department of State and organizations like the United Nations and the Red Cross, finally made it to the United States. By that time, Joseph had three sisters and a brother, who were all born in the camp.

Young Joseph remembers being stunned by two things when he finally crossed the US border: happy, smiling people and his first taste of ice cream. “I will never forget how volunteers were greeting us and hugging us,” recalls Joseph. “At that very moment, I dared to dream that I could be like those normal people: eat healthy food, get an education, and own one pair of shoes.”

“What would be your message to people now?” I asked at the end of our conversation.

“Think about others in the same way you think about yourself,” he quickly replied. “You can do the simplest things: contribute $5 to help people in a poor country, where $5 will feed an entire family for a week.” Then he paused and went on to say: “We blow our money here on the craziest stuff, things that won’t ever make us happy. You can have 25 pair of shoes at home, but you will buy yet another pair. But just think: there are people who have never had a single pair of shoes to call their own.”

More than 65 million people around the world have been forcibly displaced from their homes – that’s the highest number in recorded history. Millions of refugees are fleeing conditions in Syria, Iraq and Afghanistan, creating one of the most daunting humanitarian crises in decades. Red Cross and Red Crescent volunteers work in countries all around the globe to help  families in search of a better life. You can read the Restoring Family Links blog to learn more about the ways Red Cross and Red Crescent volunteers help reunite missing family members. Or visit the International Committee of the Red Cross to see how they’re helping save lives in conflict zones. Check out the International Federation of Red Cross and Red Crescent Societies web site for even more information about this crisis.