A Final Gift of Thanks 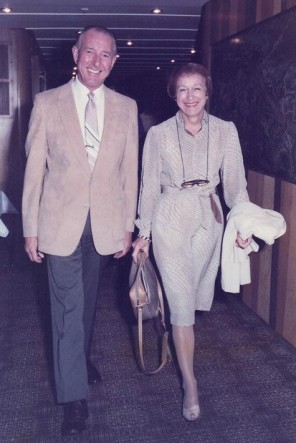 In 1944 during World War II, the United States military had just captured Guam when U.S. Naval Officer Daniel Gerard “Gerry” Woodward returned from training to find that his destroyer, the USS Hailey, had already left on a mission. Not knowing what to do, the American Red Cross staff found him housing and meals until they were able to reunite him with his ship.

It was a kindness he never forgot. It led to years of service with the Red Cross, including several years as the chairman of the blood donation program in Portland, OR. It also led to a final gift of thanks from his family’s estate.

In gratitude for help during the war, Gerry and his wife Gloria left a sizable, final donation to the Red Cross earlier this year.

“A lot of our donors have been blood donors over the years, or they’ve been impacted by an emergency or a disaster in life,” explained Monica Long, Northwest Region Red Cross Gift Planning Officer. Woodward’s daughter told her, “Dad was just so moved. He said, ‘I don’t know how I would have survived that moment had they not been there.’”

Gifts like the Woodwards’ to the Planned Giving program account for a significant percentage of the financial donations the Red Cross receives each. The Red Cross is not a government agency and vast majority of its funding comes from individual and corporate donations.

People give in many ways. They might put it in their will, or name the Red Cross as a partial or full beneficiary of a life insurance policy. Others donate retirement funds, real estate, set up a charitable gift annuity, among many gift giving options.

Some may give $1,000. Some give seven figures, which a donor in the San Francisco Bay area did earlier this year.

It’s fulfilling work for Monica, who joined the NW Region in 2016. “To me, the mission is just so compelling,” she explained. “I ask every donor, why the Red Cross? Because I learn so many new stories about how the Red Cross impacts people.”

For more information on planned giving, visit  http://www.redcross.org/local/washington/donate/planned-giving, or reach out to Monica Long at 206-726-3511 or Monica.Long2@redcross.org.

#twinsies! Looking good Joyce and Norm! You wear the logo well. ❤️
Spotted in a parade!
A winter wonderland filled with hope.
Our GINW team, talkin’ turkey and making great things happen for the #spokanewashington community.
My Tweets