How to Raise Water-Smart, Water-Safe Kids

There is one very grim statistic that no parent should ignore: that nearly 400 children under 14 die from drowning in the U.S. each year. And five times that number require emergency treatment for non-fatal water-related injuries.

You can’t hope to keep kids away from water. Even if you live far away from lakes and ponds, your community or a neighbor is likely to have a pool. So how do you let your kids enjoy the water without becoming another statistic?

The answer, says veteran swimming instructor Bridget Verhei, is for parents to make use of  the many resources available for raising self-confident kids who are water-smart and water-safe.

Verhei is a long-time Red Cross instructor trainer educator. That means she is qualified to  train the people who will then train lifeguards and others involved in water safety. She is also aquatics supervisor at the Si View Metro Parks recreational complex in North Bend, Washington–one of the  facilities around Washington state that offers the Red Cross Learn-to-Swim program. 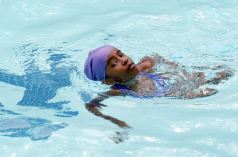 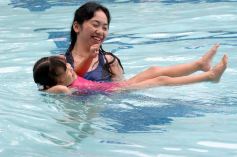 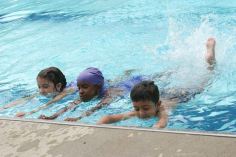 Her first bit of advice to parents is to understand that  raising water-smart,water-safe kids is a double-edged sword. “You want kids to enjoy the water but you also want them to respect the water,” she explains.

When it comes to getting kids to respect the water, there is one rule to be stressed ahead of all others. “Teach your child never to go into the water until he or she has been invited by an adult, “Verhei  says. “Teach  your children that rule, and then teach  it again and again and again.”

Verhei starts formal swimming lessons when kids are as young as three. But you can start developing a water-smart child long before that.  Verhei suggests introducing an infant to water as early as six months–starting with the bathtub at home and moving onto a pool when the child seems comfortable in the water.

Start by partially immersing the child in the water. Drip water over the child’s head and face so it becomes used to having water in its ears and eyes. “Just a few drops until he or she gets used to it,” she says.  Music can stimulate the child to do the arm and leg movements that in time will develop into stroking and kicking. “ ‘Wheels on the bus’ is a good one,” Verhei says, “but there are quite a few good songs you can adapt for the pool.”

Move at a pace that is comfortable for parent and child. Giving the child a quick dip under-water is an important step in the learning process, but hold off until you feel comfortable doing it. “Any anxiety that you express will be quickly picked up by the child,” says Verhei. 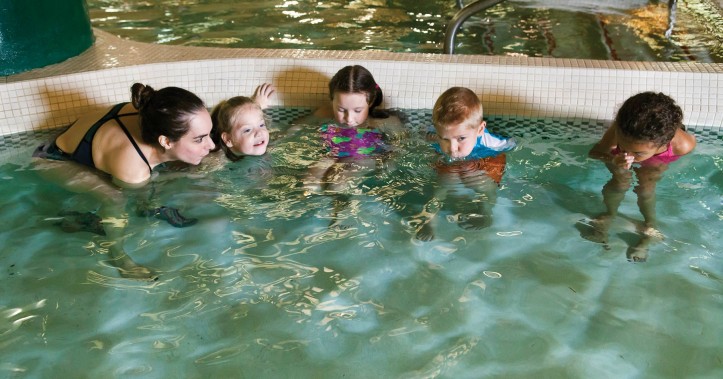 There is plenty of help available to parents seeking to raise water-smart, water-safe kids. Water safety has always been a core component of the American Red Cross mission–but never more so than today.

Check out www.redcross.org/take-a-class/swimming for information on what programs the American Red Cross offers and where to find learn-to-swim and water safety courses. The Red Cross Learn-to-Swim app–designed to complement the Learn-to-Swim program– is available at the Apple App Store for Apple; the Google Play Store for Android;  and the Amazon Kindle Store for Kindle Fire devices.  Also check out the “Longfellow’s WHALE Tale resources at www.redcross.org/teachwatersafety/whale-tale-resources. It is a comprehensive, inter-active program for teaching water safety to kids.

The Red Cross emphasis on water safety has been sharpened by the Aquatics Centennial Campaign–a joint push by the Red Cross and such partners as Nationwide, to reduce deaths by drowning. The campaign’s five-year goal was to to give swim lessons to 50,000 individuals in 88 communities across the U.S. In fact, the goal was reached in four years. The campaign has also reached its goal early of certifying more than 1,000 lifeguards and water safety instructors.

As parents, the goal of the Aquatics Centennial Campaign should be your goal as well–to raise kids who know how to stay safe in the water while enjoying  all the positive things that water sports have to offer.