Hilary Franz, Washington’s Commissioner of Public Lands, sees the outlook for wildfires in the state changing — and not in a good way. “The wildfire season in Washington is starting earlier in the year and going longer,” says Franz, who heads the Department of Natural Resources. And while most wildfires still are in Eastern Washington, more are coming west of the Cascades.

The statistics bear out that analysis. Back in 2008, Washington had 267 wildfires by July 4th — 65 of them on the West side. During the same time period this year, the state had 511 fires — the first one coming unseasonably early in February. Snow and rain usually keep Western Washington mostly fire-free until the summer. This year, the first Western fire came in April. “That is pretty unprecedented,” says Franz, whose background is in environmental and land-use law.

The hotter, drier weather that has come with climate change gets much of the blame for the epidemic of wildfires. So does decades of neglect of our forests — leaving them more vulnerable to fire. Nor are climate conditions that make for fires likely to modify any time soon. The Climate Impacts Group of the University of Washington forecasts a likely 5.8 degree Fahrenheit rise in temperatures in the 2050s, compared with average temperatures between 1950 and 1999.

As for Western Washington, the Group warns “Climate change is expected to increase fire activity in the Puget Sound region.”

All of this is worrisome for the American Red Cross, since the Red Cross must open shelters to house residents evacuating fire areas. In fact, the Red Cross opened a shelter as recently as late June to care for evacuees from a fire in the Wenas Valley near Yakima.

Fortunately, all the news about wildfires isn’t so grim. While there are more wildfires, the agencies that fight fires have come up with strategies for reducing the destruction caused by these fires. In 2014, wildfires burned 1 million acres. There were more fires in 2017, Franz says, but just 400,000 acres burned. This year’s 500-plus fires have consumed just 15,000 acres. “We are leveraging all of our resources to keep fires small,” she says.

One approach is to train more people to fight wildfires. “Eight hundred of the 1,500  Department of Natural Resources employees are trained to go out and fight fires,” Franz says. Beyond that, the department can call on 550 seasonal firefighters.

Not only are there more people to fight fires but they are now getting much improved training. 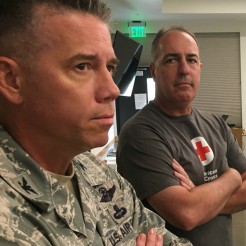 Many different groups provide firefighters — the National Guard, the U.S. Forest Service, local firefighters, and those teams from the DNR. In years past, each group carried out its own training, When they were sent out together to a fire, communication and coordination was often weak, hampering efforts to fight the fire.

This year, Franz’s department held three sessions at which firefighters from all the involved agencies lived and trained together. In all, 1,200 firefighters were trained. Units won’t be strangers when they meet on the fire line, and coordination and cooperation should be excellent.

Better use is being made of firefighting resources. Elements of the state’s air fleet — helicopters and fixed-wing aerial tankers that can scoop up huge quantities of water to drop on a fire — are being pre-positioned to where fires are considered most likely to break out.

Finally, there is the state’s ambitious 20-year Forest Health Strategic Plan, which aims to reduce wildfires by culling out the trees considered most likely to burn. An estimated 2.7 million acres within the state contain forests weakened by disease or old age and, thus, vulnerable to fire.

Bit by bit over 20 years, these forests will be restored to good health. Old trees will be taken down, overgrown areas will be thinned out. Instead of waiting for vulnerable forests to catch fire, they will be taken out through “prescribed burning.” That means fires deliberately set and tightly controlled. Students at one training session got firsthand experience in dealing with a wildfire by managing a controlled burn.

Then there is the human element. Human activity and mishaps cause 75% of all wildfires Franz says. Her advice:

Finally, Franz says, pay attention to burn bans — high-risk periods in which no outdoor fires of any kind are allowed.

(Editor’s note. Watch for a follow-up article on how to keep yourself safe when a wildfire threatens.)