Stopping the Bleed may Save a Life 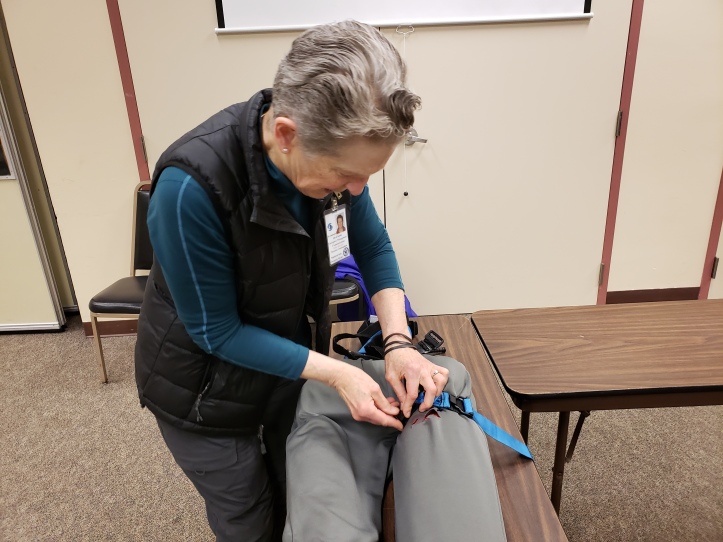 With mass shootings dominating headlines in the U.S., it’s becoming more important than ever that bystanders know how to react to increase their odds of survival and to keep gunshot victims alive until trained medical professionals arrive.

That’s the intent of the “Stop the Bleed” initiative, launched by the White House in 2015. Locally, the Lake City Emergency Communications Hub in Seattle is one of a number of groups offering “Stop the Bleed” classes to help community members be more prepared.

At a recent class offered by the Lake City Hub, retired University of Washington School of Nursing professor Sandra Adams Motzer explained people can die from bleeding in less than three minutes. It’s the leading cause of preventable death after a penetrating injury, such as a gunshot, or a home improvement mishap, a serious vehicle or train accident, or an injury while climbing or hiking.

“The elephant in the room is active shooters, and that’s what people are thinking about,” Motzer said. “It’s going to be up to bystanders to help” until trained professionals arrive.

The training included a grimly graphic video showing enactments of mass shootings and what to do to protect yourself: Run away if possible. Hide if that’s not an option. Fight back if there’s no other choice.

Fellow Hub member and retired UW nursing professor Susanna Cunningham summed it up, saying one of the hardest lessons from the video was that if someone is still shooting, you can’t stop to help victims. Your only responsibility is to keep yourself alive until the scene is safe. “You can’t help if you’re dead.”

But what do you do after the shooting stops?

For an arm or leg injury, the goal is to control bleeding, Cunningham said. Put on a tourniquet. If you don’t have that, put a cloth (clean, if possible, but not critical) on the wound and put substantial pressure on it with both hands. Larger wounds may need to be packed with with either cloth or gauze. Wounds in the neck, shoulder or groin (junctional areas where a tourniquet cannot be placed) are managed with compression and packing if they are large.

To make it easier to find these life-saving materials, the Stop the Bleed initiative is also advocating for specialized bleed kits to be installed next to AEDs in public facilities and businesses.

Groups of class attendees then took turns practicing placing tourniquets on mannequins and on slowing or hopefully stopping bleeding by packing gauze into foam blocks with holes carved into them to mimic small and large wounds.

Megan Elliott, with American Red Cross Training Services, took the class and said afterward, “I will never in my entire life forget what it was like to put my fingers in that piece of foam. Putting your fingers in that foam that was simulating a wound, was very powerful.”

With the tourniquets, attendees were told people often fail to make them tight enough. Putting it on right is going to be painful, but the goal is to save a life, not a limb. Cunningham offered reassurances, saying that no one has had to have a limb amputated from wearing a tourniquet less than two hours.

Another training option offered by The American Red Cross is a straightforward and concise online course, First Aid for Severe Bleeding. Like the in-person class, it’s training that could very well save lives.

“I think the hope is that the next time there is a mass shooting, the average person will be a little bit more prepared,” Elliott said. “We can no longer wish these things away. We need to be prepared. Until help gets there, we need to take care of one another.”

Take a class from the American Red Cross. Find the course that meets your needs. Visit: https://www.redcross.org/take-a-class