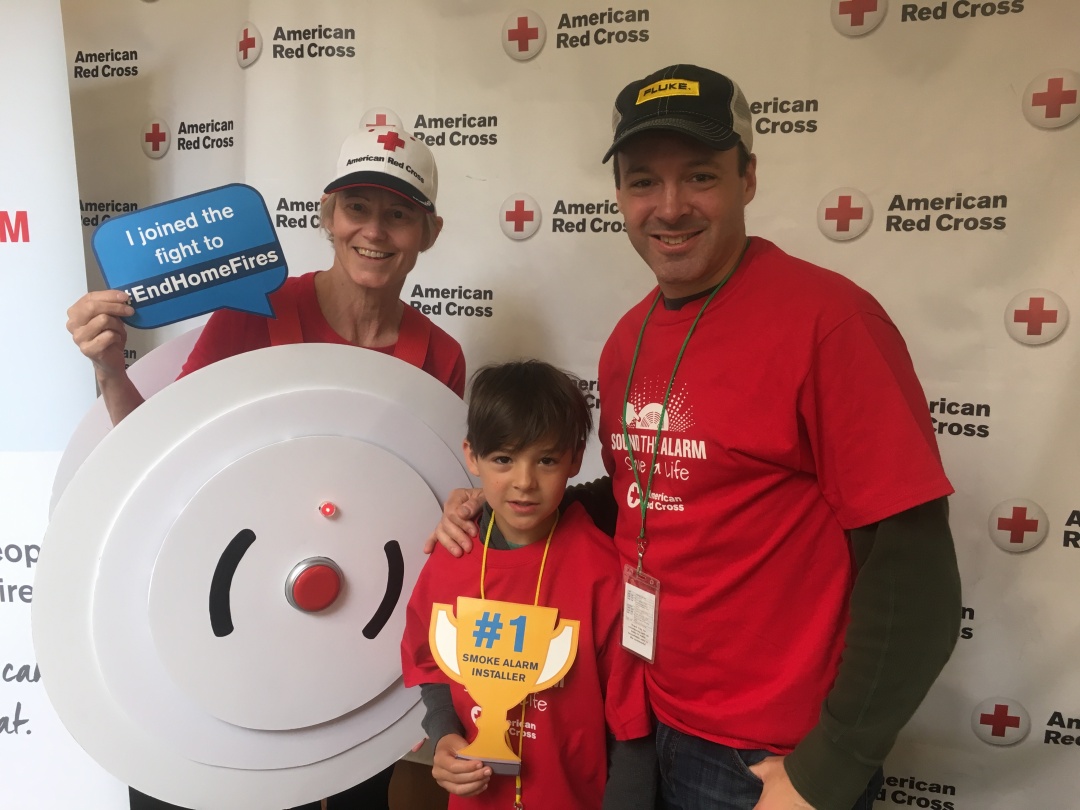 May 16, 2019 RedCrossNW Sound the Alarm, Volunteers

A top priority for any Red Cross chapter is forging strong ties to the community it serves. That is why chapter boards of directors try to draw members who represent every corner of the community.

That need to build a diverse board of directors explains why Eric Conley sits on the board of the Snohomish County chapter of the Red Cross, based in Everett WA and one of the seven chapters that make up the Red Cross Northwest Region.

The Snohomish County board includes representatives from local business and education, from religious and civic groups and from the Everett Police Department. Conley is president of Fluke Industrial Group – a global manufacturer of very sophisticated test and measurement equipment, with headquarters in Everett.

Fluke operates worldwide, but its executive offices are within Snohomish County. So, Conley brings heaps of corporate business experience to the board. But he lives and works in Snohomish County, so he can see close-up how the Red Cross serves the unique needs of the county.

“Snohomish is a great place, but still there are a lot of people who need help,” he said. ‘The Red Cross is a great organization, but what is important is how deeply it is embedded in the local community.”

Conley recently had a chance to give his time and talent to the local community by helping to install smoke alarms in homes as part of the Red Cross Sound the Alarm campaign. The campaign seeks to install 100,000 smoke alarms nationwide in homes that don’t have a working alarm. The aim is to cut home fire deaths by 25 percent.

Conley and his eight-year-old son Ollie set off the morning of April 27, with a team of Red Cross volunteers. The father-son duo replaced batteries in several dozen Everett-area homes and installed six alarms in homes that lacked them. Father Eric did the installation work. “The ladder only had two steps, so Ollie couldn’t reach the ceiling,” Conley said. “But he handed me tools and helped entertain the homeowners.”

After the event, Conley posted this message: “Ollie and I had a great time installing fire alarms in Snohomish County today with the American Red Cross. It’s not only great fun, but it also saves lives in our community.”

That brought this response from Kelli Thode, executive director of the Snohomish County chapter. “Thank you, Eric, for volunteering with your son in Saturday’s Sound the Alarm event, and for your support year-round. We appreciate you!”

Conley joined the Snohomish County board just a year ago. The invitation came from Emily Weaver, a member of the chapter board and an executive at Fortive Corporation, parent company of Fluke.

“I was pretty excited about the opportunity,” he said. “I knew something about the Red Cross – how they collect blood and help out at fires. I knew they helped people in the military.”

What surprised him was the many diverse roles the Red Cross plays in the local community. “When people see the Red Cross on your jacket, so many of them have stories to tell on how they were helped by the Red Cross,” he said. “You learn how the Red Cross has a real meaning for so many people. It has touched so many lives.”

As a director, Conley has attended board meetings and offered his help in raising money for the Red Cross, including playing an active role in the chapter’s Heroes Breakfast last December.

It was working at the Sound the Alarm event that really showed him up close how the Red Cross serves its community. It also offered him a great opportunity to teach his son Ollie about the importance of helping others.

“Ollie wanted to know about the people we were helping – who they were and whether we knew them,” Conley said. “I want to make sure the boys understand the importance of giving their time and energy to helping others.”