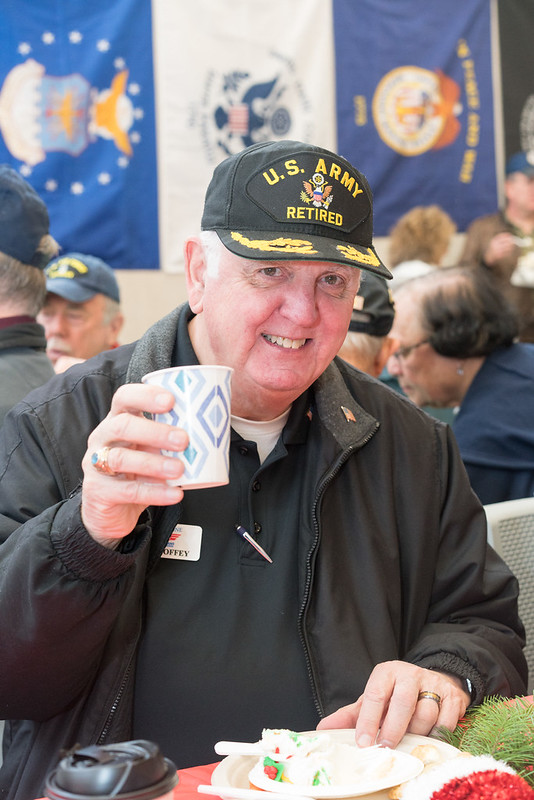 Military Vets are the heroes at this Hero’s Cafe

The American Red Cross is widely known for the aid it provides the military through its Service to the Armed Forces (SAF) program. In Lynnwood WA, the Red Cross goes a step beyond that in acting as a sponsor and facilitator of a local initiative for veterans called the Hero’s Cafe.

To be a Hero, you need to have served your country in one of the branches of the military. If you are a Hero, you are most cordially invited to drop by Lynnwood’s Verdant Community Wellness Center on the final Tuesday of each month. That is when you’ll find the Hero’s Cafe going strong, providing veterans of all ages an opportunity to both talk and learn.

Besides being a venue for vet-to-vet chatting, the Cafe offers a nourishing meal prepared under the direction of Myra Rintamaki, a very active Red Cross volunteer. Myra does the food shopping and supervises the cooking, but also plays a key role in running the Cafe.

The Hero’s Cafe opened at the start of 2017, making this the start of year four. It routinely draws 100 to 125 vets each month, Myra says. “Our peak one month was 155 vets,” she adds. That continued high attendance is one way of measuring the success of the Cafe. Another is that a second Cafe-style facility is due to open on January 15 in Snohomish County, launched by volunteers from a food bank in Edmonds WA.

The basis for the Hero’s Cafe is recognition of the special bond that exists among those who have been in the military, and the need for a place where military veterans can talk openly and honestly about their service. The Cafe draws veterans of all ages, from those who served in Iraq and Afghanistan to those who fought in World War 2.

Bob Grasmick, age 86, is the only vet to have attended every Hero’s Cafe since the opening. Bob was working on his family’s Colorado farm when he was drafted into the Army in 1954. He served two years in the field artillery before leaving the service in 1956.

So, what does Bob get out of the Hero’s Cafe? “I get a whole lot out of it,” he says. For one thing, it gets Bob, a widower, out into the world. “It’s a good excuse for getting out of the house,” he says. “If I didn’t have this, I would be sitting around looking at the four walls.”

Bob says the Cafe gives him a welcome opportunity to meet other veterans and to swap stories with them. “We all explain where we were and what we did,” he says. “We all get to exchange our stories.”  Bob is one of the older vets at the Hero’s Cafe, but far from the oldest. He is often accompanied by a 95-year-old friend, a fellow member of the American Legion who piloted fighter planes in World War 2.

Myra Rintamaki says the idea for the Hero’s Cafe was born within Lynnwood VFW Post 1040. She says a member who had just moved to the area described a program for veterans that ran back home in Wisconsin. “It sounded like such a good idea, we decided to open something similar in Snohomish County,” she says.

She gives credit for getting the program up and running to Gary Walderman, a veteran of more than 20 years in the U.S. Air Force. Like Myra, Gary is a member of VFW Post 1040. Not only did he help launch the Lynnwood Hero’s Cafe, but he also is serving as a consultant to the new veteran’s program just getting started in Edmonds.

The Lynnwood Cafe has enjoyed considerable community support. The city of Lynnwood has been involved with the Cafe since it opened. Most local veterans groups are partners in the program, including the Washington Gold Star Mothers. (Myra, who lost a son in Iraq, is a Gold Star Mother.) Verdant makes the meeting space available at no cost.

A different organization sponsors each monthly Cafe. In addition to supplying volunteers to work at the Cafe, the Red Cross has been the Cafe’s sponsor each October. Myra herself has been a Red Cross volunteer for many years, since she retired from a career in the health care field. She was first a Red Cross caseworker to disaster victims, and is now involved in community outreach and in Service to the Armed Forces.

A typical Hero’s Cafe begins at 9 a.m. with an hour or so of socializing. Most meetings will have a program, covering a topic of interest to the veterans. One session dealt with how the veterans might benefit from service animals. Another offered advice for staying healthy during the cold winter months.

Veterans who show up in need of assistance are directed to Gary Walderman, who usually knows where to direct them for help. Gary finds that many older vets have never received all the benefits they are entitled to. Each Cafe has a veteran’s service officer on duty, to assist anyone who needs help in applying for veteran’s benefits. Vets can bring their spouses to the Cafe, which is important since service-related issues that impact one spouse will impact the other.

Next, Myra and her crew serve lunch, and the Cafe usually shuts down by 1:30 or 2. There is no tally of how many vets have been helped by attending a Hero’s Cafe. That attendance has stayed strong month after month for three years is solid proof that what the Cafe offers is welcomed by men and women who paid for that help through their military service.