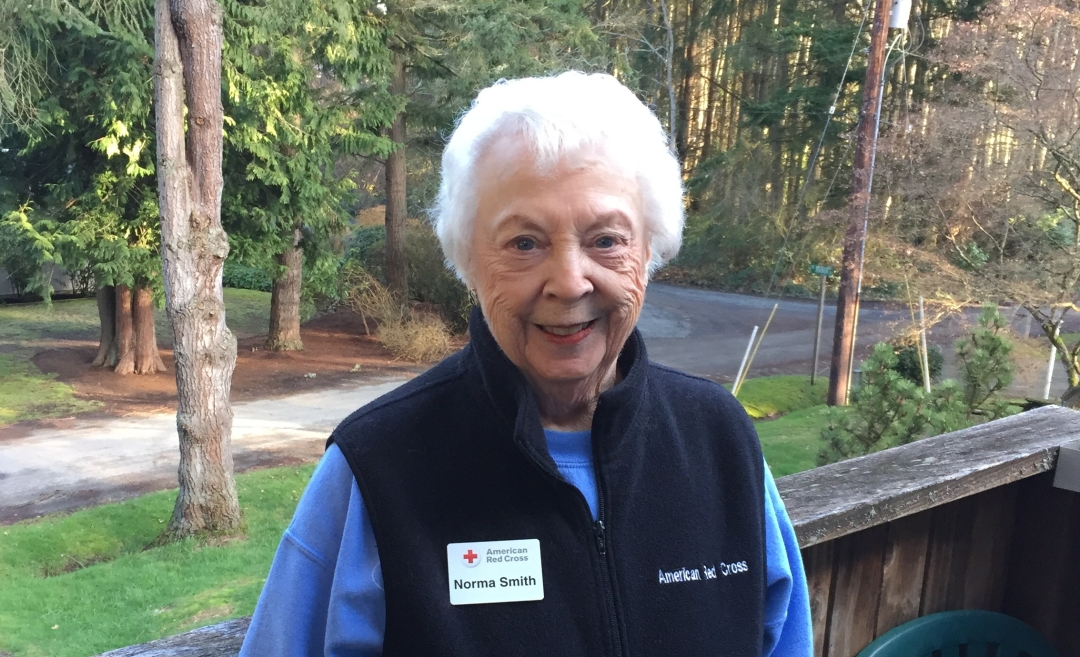 Volunteer Norma Smith of Bainbridge Island, WA first heard of the American Red Cross in 1943 when she was a 10-year-old growing up in Detroit. In letters back home from his military base, brother Kenneth wrote about the Red Cross serving him coffee and donuts. Kenneth, who later would die in World War 2, found the offerings both welcome and comforting,

“I didn’t know anything about the Red Cross, so I asked my mother,” says Norma. “She said they are good guys who bring you coffee and donuts.”

At 88, Norma is one of those Red Cross “good guys,” still a volunteer as she has been for decades. Volunteers account for 90 percent of the Red Cross workforce. Without volunteers as committed as Norma Smith, the Red Cross could not carry out its mission of aiding victims of natural disasters, teaching first aid and water safety and managing much of the nation’s blood supply.

I asked Norma to list all the things she does for the Red Cross. Her answer filled nearly an entire page of typewritten notes.

Bainbridge Island is linked to Seattle by ferry boat, and by a bridge to a remote corner of Kitsap County. It would take time to bring supplies to a disaster scene on Bainbridge Island, so the Red Cross maintains a supply trailer there. Norma helps keep the trailer fully stocked with fresh supplies.

In a more normal year, she would have logged 7,000 miles driving from Bainbridge Island to Bremerton, where the Red Cross has an office. She would spend at least one day a week in Bremerton helping wherever needed.  She has been a nurse since the 1940s and has taught Red Cross classes in CPR and first aid. Bremerton is part of the Red Cross South Puget Sound & Olympics chapter, and Norma is a member of one of the chapter’s Disaster Action Teams (DAT). DAT teams deliver immediate Red Cross assistance to disaster scenes.

Norma says she is too old to lug relief supplies and do other chores that DAT members do. What she can do is use her nursing skills to deliver whatever medical assistance is needed at the scene — making sure that disaster victims have access to all needed medications. Norma is on call for a week every five weeks.

She reckons she has been the health services person at 40 or more disaster scenes over the years, mostly house fires. Most have come at inconvenient hours. “It is always two or three in the morning when they call me,” she says.

As most Red Cross responders have had to do, recently Norma learned to provide assistance from a distance to disaster victims. “It is necessary to close cases virtually, but I miss the face-to-face contact with the people we are helping,” she says.

The Red Cross supplies a huge share of the nation’s blood supply and Norma’s connection with Red Cross blood services goes back to when she was a 16-year-old student nurse in Detroit. As a nursing student at Wayne State University, she helped with Red Cross blood collections. “I wanted to give blood myself,” she says. “But you had to weigh at least 100 pounds to donate blood, and I didn’t weigh 100 pounds.”

After marriage, she and her late husband Jerome moved to California, and there she became a Red Cross volunteer. She was a hospital supervisor at a burn center in Sherman Oaks, CA. “I used to book Red Cross blood drives into the hospital,” she says.

Norma began giving her own blood at the California hospital and continued that as long as she could. “I was working on donating my 13th gallon of blood when I got a heart pacemaker and they told me I had to quit donating blood,” she says. She still provides medical support at Red Cross blood drives.

She and Jerome moved from California to Washington in 1996. Jerome had family in the state and there is now a daughter, two sons and a granddaughter living on Bainbridge Island. “My husband warned me when we were married that we would retire to Washington,” Norma recalls. “I was looking for something to do when we moved to Washington and there was the Red Cross.”

With her nursing background and her Red Cross experience in California, she was a welcome addition to the Northwest Region Red Cross team.

All that Norma does for the Red Cross would be taxing for someone younger than 88. Yet the Red Cross is not all she does as a volunteer. She is also a member of her local Community Emergency Response Team (CERT), providing medical assistance at disaster scenes that her team responds to. Finally, Norma finds time to help with her local meals-on-wheels program, delivering food to the sick and elderly.

When is Norma likely to put down her workload and retire?

“Nurses,” she says, “never retire. We just quit getting paid.”