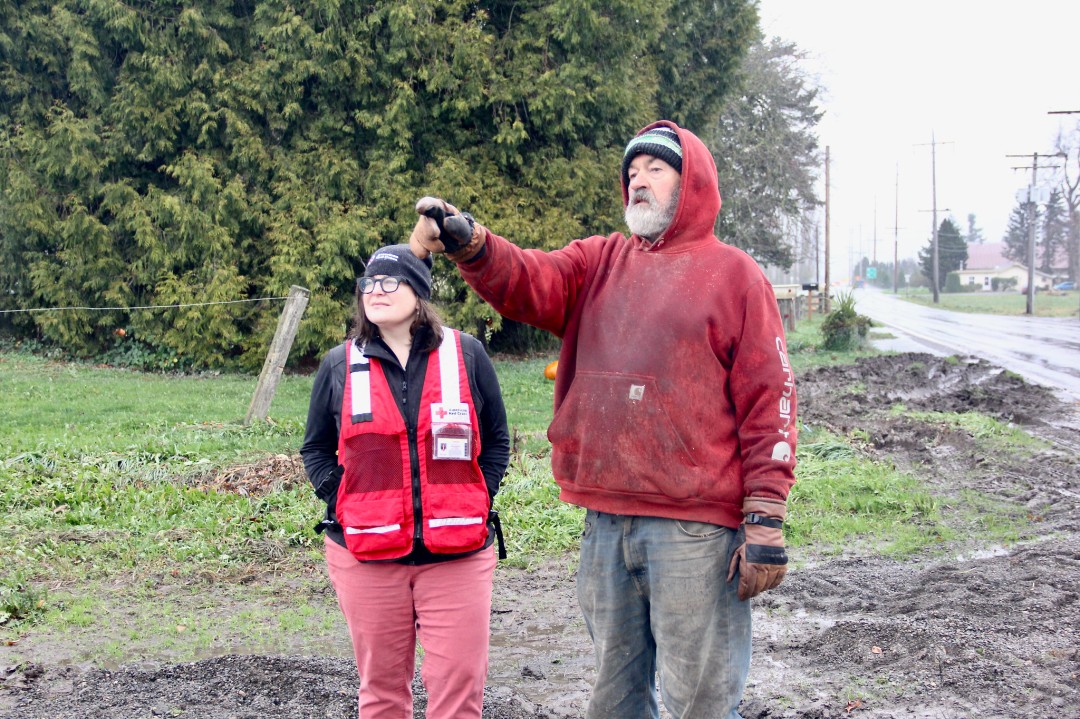 Augie Berendsen of Everson WA knew the flooding had become really bad when he began hearing calls for help from the fields outside his farmhouse home. It was dark on the evening of November 14th and somewhere out in the darkness were people trapped by the fast-rising waters of the Nooksack River.

The farm is a few miles south of the U.S.-Canadian border and Augie has lived there his whole life. He had seen floods before–two years of flooding back-to-back in the early 90s and again two years ago. Never, he says, had he seen anything like the floods that swamped Northwest Washington on November 14th and 15th. “I have never seen anything as severe as this,” he says.

Hearing those cries for help, Augie set off on his own rescue mission. What he saw that night as he ventured out shocked him. Not only were his fields underwater, but there were waves three and four feet high, topped by whitecaps, sweeping across the fields. Augie says the soaked ground is now covered with the bodies of dead fish. “I have seen a lot of dead fish,” he says.

“The first thing I did was help a police officer close Badger Road so no one else could drive into the floodwaters,” he says. Then he helped responders –led by the Sumas WA fire department– get those trapped by the floodwaters to safety. “We rescued three people, two by boat and one using a Hummer emergency vehicle,” he says. “One of the people we rescued had been sitting on a roof-top for 4 ½ hours.”

When we talked, it was more than a week after the atmospheric river dumped torrents of water on the area. Augie said that water still covered his fields. That is an indication of how much worse the flood of 2021 was, compared with floods of the past.

After past floods, Augie explains, the floodwaters usually began draining away in a day or two. That isn’t the case this time.. “The river is still flooded so any more rain is going to come here,” he says. The late November weather forecast for Whatcom County called for more rain.

The flooding brought a promise of state aid from Washington Governor Jay Inslee. The Red Cross response to the disaster makes it the biggest relief operation currently underway in the United States. Dozens of flood victims have been cared for in Red Cross shelters.

Augie says he is able to get past the flood on his own. His home escaped flooding so Augie did not have to relocate to a Red Cross shelter. But the rest of his farm did flood and Augie’s losses from the disaster could run into the many thousands of dollars.

“The water came within an inch of coming into the house,” he says. “But I got a foot-and-a-half in all the barns and in the hay sheds.” Augie is retired now but it used to be a working dairy farm. Three-quarters of a million dollars worth of farm equipment was stored in a shed that was filled with water.” There is no way of telling whether any of it will be salvageable

The hay in his hay shed got soaked by the floodwaters. The wet hay must be given away or destroyed before it fully dries out. As the hay dries, it generates heat, and eventually, that heat could set off a fire. “The hay is steaming right now,” he says.

What made the floods so shocking, was not only the intensity of the storm–bad enough to push water over the levee of the Nooksack River–but that the flooding came with virtually no warning. There is a gauge at Cedarville WA that measures the water level in the river. When the water rose to flood stage and overran the banks of the Nooksack, there should have been a warning sent out to alert residents and responders of the danger. This time there was no warning,” Augie says. “Nobody had a warning.”

The level of the Nooksack is down a bit from the mid-November peak, and the cleanup has begun. Augie says he is leading a team of volunteers who are doing what they can to restore some semblance of normality to the area. Red Cross workers are keeping flood victims safe in shelters, and providing assistance to help the victims rebuild their lives.

I asked Augie if the flooding made him think about relocating to someplace that isn’t likely to flood. No, says Augie, he will stay just where he is. “I have lived here my whole life. I was born in this house 69 years ago and I am not going to leave now.”

You can help people affected by disasters like fires and countless other crises by making a gift to Red Cross Disaster Relief. Your gift is a commitment to helping people in need, and every single donation matters.

Your gift enables the Red Cross to prepare for, respond to and help people recover from disasters big and small. Visit redcross.org, call 1-800-RED CROSS, or text the word REDCROSS to 90999 to make a $10 donation.