When Hurricane Harvey hit Texas, Albert Lam wanted to help those in need. He thought about how he could be supportive and came up with an idea: to set up a fund and sell pencils monogrammed with the Hurricane Harvey Relief Fund name to raise money. He asked his parents, Hao and Lisa Lam, for their advice and they were very supportive. They funded the pencils and let Albert direct all of the proceeds to his relief fund. 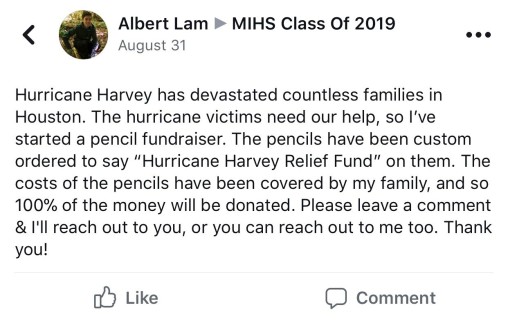 Albert, a student at Mercer Island High School, posted a message on his school class page and received an overwhelmingly positive response—in the first 24 hours, Albert had already raised two hundred dollars. After all of the pencils were sold, the project yielded over $16,000! Giving back to the community is important to Albert. He is the vice president of the Key Club at the high school and helps organize volunteer activities for his fellow students. He says, “My closest friends like to volunteer and help people. They’re generous and like to give back to the community.”

The Key Club members often work with EarthCorps, help raise funds for nonprofit organizations, such as the Kiwanis Children’s Cancer Program, and volunteer at local food banks. “Generally our school comes together when they see something that will help the greater good. You have to do what you have to do. It takes a lot of time, but it is definitely worth it.”

Albert credits his father as a role model. Hao is active in fundraising for local organizations, including The Red Cross, and is active in the Asian community in the International District. Albert says that he was also inspired by an older Chinese woman who helped raise money by going door to door in the International District and asking for donations from small businesses. He says that even though as an older woman “she doesn’t look very strong,” but her actions have had a big impact. And finally, he says, “The big takeaway is that, it kind of sounds cliché, but the power of one can really do a lot, even if you don’t expect it. You just have to start it.” 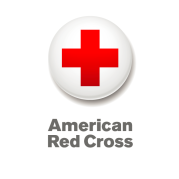 The year is barely half over and Rhonda Jack has already been deployed four times to Red Cross relief operations. These are face-to-face, boots-on-the-ground events where she has worked to bring relief to victims of disasters.
.
Our Summer Youth Program on Joint Base Lewis-McChord is in full swing! Sixteen military youth are participating in the 7-week program to gain professional development skills and to give back to the military community by volunteering their time during the summer.☀️
DISASTER UPDATE